The global idle containership fleet at the end of December 2015 hit a record high with a total capacity of 1.36 million TEU, which represents five times more compared to 0.23 million TEU at the beginning of the year, market analyst Alphaliner reports.

The idle containership fleet stood at 331 vessels at the end of 2015, with the number of idle vessels under 7,500 TEU increasing due to tough market situation.

Additionally, the analyst said that the containership fleet reached a total slot capacity of 19.94 million TEU at the end of 2015, growing by 8.5 percent over a period of 12 months. Furthermore, a record number of 214 new containerships entered the market in 2015.

The new ships added 1.72 million TEU to the global fleet, while only 0.20 million TEU were deleted as a result of scrapping, vessel conversions or casualties.

However, the weak market did not stop owners from ordering more containerships in 2015. A total of 255 vessels was ordered with a total capacity of 2.34 million TEU, contributing to further oversupply in the market.

Alphaliner said that a significant reduction of the idle fleet is not expected before April, due to blank sailings scheduled to continue in February. 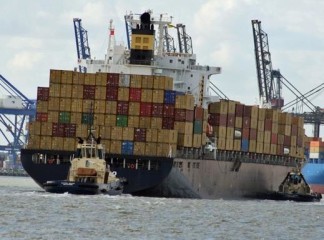